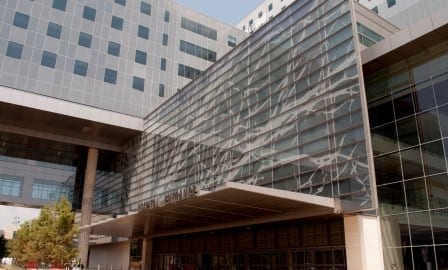 Inside look at the New Parkland Hospital in Dallas, TX

Parkland Memorial Hospital has delivered more infants under one roof than any other hospital in the nation, currently averaging more than 10,000 deliveries per year. In addition, there are over 240,000 emergency visits each year with more than a million patient visits annually. However, treating this many patients in an overcrowded, 50+ year-old facility soon became a challenge, and with Dallas one of America’s fastest growing cities, an increase in traffic was sure to come.

So when planning began in 2002 to construct an updated Parkland facility, the stakes were certainly very high indeed. Renovation of the existing facility was not an option, as it would have led to diminished patient capacities that would have been unacceptable. The decision was made to replace the building with a new 1,700,000-square-foot, 17-story, 862-bed facility, along with a new 380,000-square-foot outpatient center, a 275,000-square-foot office facility, and parking for 6,000 cars, all housed on a 2.5 million-square-foot campus located on the northeast corner of Harry Hines Boulevard and Medical District Drive. Total cost of the project is about $1.3 billion.

At nearly twice the size of the current hospital, the new Parkland Hospital was designed to meet both the present and future needs of Dallas County. The hospital is one of the first “digital hospitals” in the United States, featuring technological advances that didn’t even exist when planning began more than a decade ago.